I’m not sure what it is about the Pacific Northwest in this country but as far as independent perfume goes it seems to be fertile ground for fragrance. Latest evidence of this creative Renaissance is the newest release from the Seattle-based store Blackbird. Blackbird recently transitioned from a brick and mortar store with an online presence to exclusively online. As a big part of this vibrant scene the store was a place to have events. It was one reason that the initial seven fragrances released under the Blackbird brand were a little disappointing. They were provocatively named, Pipe Bomb as an example, but they failed to impress as they were fairly linear and simplistic. I trusted that was what their clientele wanted and didn’t really give them another thought. A couple months ago I received the latest release Blackbird Triton. Because of my previous experience I kept pushing it down the priority list until a couple weeks ago.

Triton is named after the moon of Neptune and inspired by the icy orb. It has a frozen surface populated with cryovolcanoes which erupt in jets of frozen nitrogen. The fragrance inspired by this harsh landscape is a study in the cooler notes on the perfumer’s palette. Throughout its development it carries a metaphorical frost with aldehydes and violet providing the initial chill. It stays extremely delineated through a dry heart before having its own cryovolcano which shoots out a stream of incense. 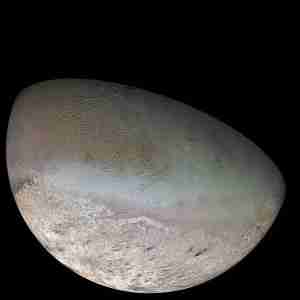 Triton immediately goes frigid as the more metallic aldehydes are combined with violet leaf. There is also just a pinch of black pepper to simulate the tickle in one’s nose when breathing in very cold air. This has an almost sci-fi kind of metallic gleam to it, which seems appropriate. With the violet leaf continuing the icy vibe; an extremely dry cedar and very astringent vetiver form an austere heart. This is a barren set of perfume notes it almost echoes it is so punctuated. I think that this is where some will have difficulty with Triton. If you want your perfumes luscious and warm Triton is not your perfume. I really like the choice to keep it so locked into a minimalist attitude. The base allows an eruption of incense, styrax, and amber. These add a bit of contextual heat but not enough and fairly rapidly the incense recaptures the coolness.

I was very surprised at how assuredly Triton went through its paces. Based on the previous Blackbird releases there was no reason to expect this kind of avant-garde type of perfume. Triton really impressed me more each successive time I wore it. For something so cold it has found a warm place in my perfumed heart.