The best new perfume brands find their own space; their own aesthetic. The independent brands tend to find the more interesting perspectives. This is certainly true of Beaufort London. Founder and creative director Leo Crabtree is interested in portraying a version of English history as perfume. The first five perfumes focused on the sea-faring height of the British Empire. What made them stand out was an embrace of the less pleasant scents of the milieus he was capturing. This has made Beaufort London so striking. In 2017 he began his second collection called Revenants wherein he would use British historical figures as inspiration. The new Beaufort London Rake & Ruin is the second of that series.

The historical figure used as inspiration for Rake & Ruin is artist William Hogarth. Mr. Hogarth is most known for a series of eight paintings called “A Rake’s Progress”. They are an 18th century graphic novel on the life of the titular Rake, Tom Rakewell. The early paintings show him coming into a substantial inheritance and living the high-life. The remaining panels display the decline and eventual commission to an asylum. Each painting is stuffed with detail. Which is one of the places where the inspiration and the perfume intersect. 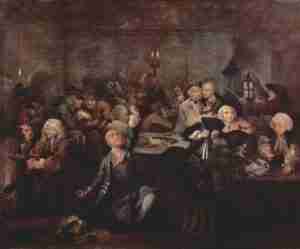 Mr. Crabtree wanted to capture one of the middle paintings in the series where Tom Rakewell is out and about in the taverns slowly progressing to his eventual downfall. Mr. Crabtree turns to perfumer Julie Dunkley with whom he has collaborated on all the previous Beaufort London perfumes. They create a perfume which captures a life spiraling out of control with a perfume which reflects that unruliness.

Rake & Ruin opens with a gin-soaked accord. It is buttressed by a set of terpenic ingredients; angelica seed and pine. This produces a rawer gin accord as if you can smell the distillation inside the liquor. A mix of Sichuan pepper and baie rose lurch into view as licorice also appears to lead into the leather accord in the heart. This is where our rake’s leather jacket is stained with the cheap gin he is drinking. This is an odd effect which I alternatively found appealing and not so much. The same dichotomy happened for me in the base as Ms. Dunkley veers towards the smoky animalic. A strong decaying gin-sweat skin accord is made up of ambrarome, castoreum and costus. The costus is brilliantly used even if the effect is slightly nauseating. A haze of smoke is layered over all of this.

It is so rare to find a perfume willing to capture the unpleasant side of the scent spectrum. Rake & Ruin does this. That Mr. Crabtree is making perfume which doesn’t pull its punches unflinchingly capturing the sweet with the sour is amazing. Rake & Ruin is the apotheosis of that aesthetic as an unruly life is captured in an unruly perfume.

Disclosure: This review is based on a sample provided by Beaufort London.