Late last year on a trip to my local Nordstrom’s my contact there introduced me to the Bastide brand of perfume. Bastide is a part of a new comprehensive beauty brand based in Aix-en-Provence, France. Founded by husband-and-wife Frederic Fekkai and Shirin von Wulffen the concept is to use Provence as inspiration for the entire line. What I like is it is a moderately priced line and the perfumes released are bargains. Of the first three releases from 2017 I purchased a rollerball of Neroli Lumiere. I’ve worn it a couple of times, but I am especially looking forward to wearing it in the spring. I was planning on doing an Under the Radar column on it next month after I became more acquainted with it. Instead my daily search results informed me of a new release which was ready to wear now; Figue Amour. 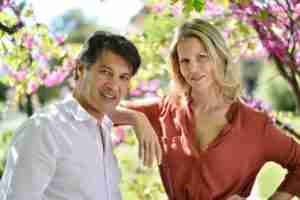 The creative team has so far exclusively worked with perfumer Mathieu Nardin over all four releases. There seemed to be an early aesthetic forming over the first three, but Figue Amour seems different which means that might not be as apparent yet. What had me so excited about Figue Amour was when I saw the note list; the heart accord was violet, fig, and orris. Those are three of my very favorite notes, my hopes were high.

In the description I am told nearly all the figs in France come from Provence. I’m not sure how many of them have violets and iris growing underneath them but that is the effect M. Nardin achieves. I spend an early spring day underneath a fig tree surrounded by purple flowers.

A stiff March breeze blows through the early moments, cardamom carries the smell of fresh berries and bergamot to me. Then as the breeze dies down the violet and orris lift me up into the figs ripe on the branches of the tree. M. Nardin uses the fully ripened fig around which the candied violet version of the ingredient coats. The orris provides a grounding effect without becoming powdery. The trunk of the tree is a smooth sandalwood given some warmth with a few musks.

I really want to point out the entire line of Bastide perfumes they are worth giving a try on your next visit to the mall. You can pick them up in 10mL rollerballs which I think is a fantastic way to encourage sampling. If you’re looking for a perfume to tame the lion of March then give Figue Amour a run it will definitely get you to the calm end of the month.