As we approach the mid-point of 2015 if I was going to point out two trends which have stood out over the first half of the year it would be green fragrances and the use of szechuan pepper; mostly as a top note. When it comes to green it is one of the fragrance genres I like therefore having more different interpretations is a pleasant problem to have. The szechuan pepper was a note I was introduced to back at Pitti last September in a talk given by Mane.They passed around some differently extracted forms of it. Each had interesting quirks that I was looking forward to seeing how my favorite perfumers would use it. One of my favorite brands Atelier Cologne and one of my favorite perfumers Jerome Epinette provided me both; a new green perfume using Szechuan pepper called Jasmin Angelique. 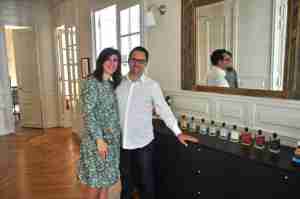 Jasmin Angelique is the sixth entry in the Collection Matieres for Atelier Cologne. Co-owner and creative director Sylvie Ganter-Cervasel describes this collection as “mythical essences reinvented”. I describe it as things you shouldn’t be able to make colognes from, even if they are in absolue concentration. Jasmin Angelique is as close as it can get early on to being a traditional cologne but once it goes green and floral it transforms into something full of powerful intent while still retaining a cologne architecture.

M. Epinette uses a very traditional bright lemon opening which is at first made slightly green with angelica seeds. Then M. Epinette unleashes the Szechuan pepper. In the case of Jasmin Angelique it provides a piquant contrast you might normally get from baie rose. The difference with the Szechuan pepper is there is a deeper banked energy that radiates off of it. If lemon provides the sunshine the Szechuan peper is providing the molten red ball of the sun itself. These early moments are fascinating in their texture. The heart notes arrive with a green wave starting with galbanum and fig. They douse the fire of the top notes underneath a verdant vivaciousness. As the green pushes the top notes to the back ground the jasmine can then arrive. M. Epinette has to keep the jasmine tightly controlled bacause the green is meant to be ascendant and jasmine is the kind of floral that can take over. He does keep it on a short leash allowing it to take its place but not to dominate. The indolic core fits right into the galbanum and fig duet. After many hours Jasmin Angelique transitions into a base of amber, tonka, and incense. The amber is the leader of the pack with the incense and tonka providing support. The amber is as warm as the opening notes were as Jasmin Angelique finishes where it began, on a warm glow.

Jasmin Angelique has to be one of the least floral perfumes I have ever tried which has Jasmine in the name. The keynotes of this perfume are the Szechuan pepper and the galbanum-fig heart chord. They are what draw me in when I am wearing Jasmin Angelique for the day. I once again tip my hat to Mme Ganter-Cervasel and M. Epinette for making a cologne out of a set of notes which you should have a difficult time doing it with. That they make it look so effortless is part of the magic of the Atelier Cologne brand.