As one who tends to sneer at celebuscents you would be interested to know how much I was looking forward to the release of Ariana Grande Thank U, Next. The reason for that anticipation was that last year’s Ariana Grande Cloud impressed me by interpreting the transparent gourmand trend in a compelling way. I would have been interested to see where this would go in any case. When I found out perfumer Jerome Epinette was involved my interest was further piqued. 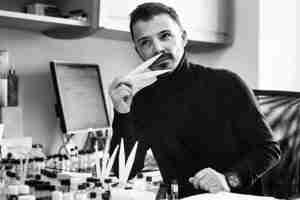 Thank U, Next is named after the song by Ms. Grande after her recent break-up. Not someone who follows the ins-and-outs of her life I am not sure if I can find an overlap between song and fragrance. What I do find is another different transparent gourmand than Cloud which is equally as good.

I’m not sure if this is intentional or not but Thank U, Next has a similar trio of pear, coconut, and white musks as Cloud does. M. Epinette tunes them to different effects than in Cloud yet there is enough similarity this could be a flanker of Cloud.

That pear is paired with raspberry to give a sweet fruity top accord. Just as it was in cloud this is kept at such an opaque level it is appealing instead of overpowering. The heart accord is coconut cream leavened with a fresh rose. This is a contrast of the fresh floral with the more substantial coconut cream. It is like finding an exotic dessert of rose petals atop a coconut custard. If you are left thinking of that dessert M. Epinette places a coconut macaroon right next to it as a sweet dough-y complement. It all ends with a clean cocktail of white musks to add lift to it all.

Thank U, Next has 12-14 hour longevity and average sillage.

For everyone who was a fan of Cloud Thank U, Next should be next to try. It has everything that made that perfume stand out while having its own personality. I am again quite amazed at how well this creative team is doing in this new fragrance space. It has me in my own way saying, “thank you, next!”