It has been said that there is nothing certain except for death and taxes. Death is a certainty we all face to be sure. The entire experience of dealing with death in your personal circumstances might seem to be an odd choice to make a perfume about. Perfumer Mandy Aftel has chosen to take this uncertain path in her newest release Aftelier Perfumes Memento Mori.

Memento Mori translates from the Latin as “remember you have to die”. Memento Mori has also been used to describe types of funerary art or literature focused on death. In her press release Ms. Aftel was thinking of Memento Mori jewelry where a memento of a recently passed loved one was placed in something that could be worn. It was a tangible method to hold on to the memory of whomever had passed on.

For Memento Mori Ms. Aftel mentions, also in the press release, that she wanted to “capture the musk-like smell of skin”. If that was her goal she missed that completely for me. My experience with Memento Mori was much more personal than that. It touched me deeply evoking many different aspects of the loss in my own life. I didn’t quite go through the 5 stages of grief but some of those emotions did bubble up on the days I wore Memento Mori. 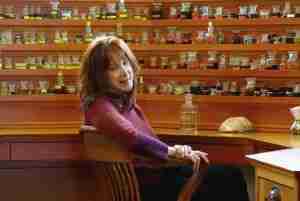 The top accord of Memento Mori is where Ms. Aftel wanted to create this skin accord. As I mentioned that was not my experience. The three notes she used butter, orris and phenylacetic acid provided something which evoked a deep sense of becoming unmoored as when a loved one passes away suddenly. The orris is not that comforting powdery friendly iris it is the desiccated root of the rhizome which the butter coats in an unctuous layer. On top of all of this the faux-animalic nature of phenylacetic acid carries a whiff of decay. This is a confrontational top accord which asks the wearer to examine their mortality. It is not pretty. It is an opening stanza in an olfactory memento mori. The second stanza is that attempt to try and build the piece of memento mori jewelry. Phenylethyl alcohol which carries with it the shadow of rose is paired with a full Turkish rose absolute. Here you have the real thing as represented by the absolute with phenylethyl alcohol representing the memory shadow. This simple duet within the heart of Memento Mori is that moment when you finally accept the loss. The final stanza carries this rose into the beta-ionone behind the smell of violets. To me it represented the beginning of life after loss. The violet performs a subtle transformation of the rose and its shadow into something which has more life to it washing away the elegiac tone. The rest of the base accord reaffirms that death may be inevitable but life goes on. Ambergris, ambreine, patchoulyl acetate and actual antique civet. When a perfume turns towards a more animalic tone I often describe it as being alive, growling perhaps. This is the moment of stepping forward from the shadows back into the light where life is moving along.

Memento Mori in parfum strength has 10-12 hour longevity and very little sillage. It is a perfume for you alone to meditate upon.

I had a hard time with Memento Mori because of the emotions it called up for me. There have been a lot of recent loss around me which might have had something to do with it. As I wore it for the second time this past week I realized Memento Mori had also been therapeutic in that it allowed me to reflect upon my personal thoughts about death. Which also makes me think of it as a companion to the literary memento mori which asked a reader to do the same.

Memento Mori as a perfume is a piece of artistic construction. It definitely creates separate phases which are expertly constructed to have a defined impact. It is a perfume that could only have been successfully completed by a few. Ms. Aftel has made her most complex perfume, to date. Which only seems appropriate considering the subject.

Disclosure: this review was based on a sample provided by Aftelier Perfumes.