There is something voyeuristic about photographs of celebrities. Certainly, there is a cottage industry of poorly taken “gotcha!” photographs taken by paparazzi. Those I have little interest in. The ones which capture my attention are the ones where well-known professional photographers have the opportunity to shoot during a particular time in a celebrity’s career. One of the more memorable pictures in that category was one taken by photographer Terry O’Neill in 1977. His subject was actress Faye Dunaway sitting by the pool at The Beverly Hills Hotel at 6AM the morning after she won her Best Actress Oscar for “Network”. Looking like she still hadn’t been to bed (she had) Mr. O’Neill captured the moment after you’ve won an Academy Award with the newspapers headlines of your win at your feet and your trophy on the table considering what’s next. It is an iconic picture for so many reasons; the early morning light, the Old Hollywood vibe, and a spectacular actress in her prime. I don’t know if this begged to have a perfume made from its inspiration but it has arrived; A Lab On Fire And The World Is Yours. 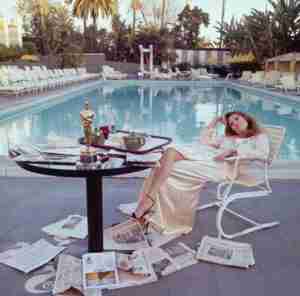 The perfumer hired by creative director Carlos Kusubayashi to take this on is Dominique Ropion. M. Ropion had converted a classic Hollywood photograph into a perfume two years previously with one of Douglas Kirkland’s photos of Marilyn Monroe. The opening to that was gorgeous but an overly aggressive musky gourmand base put me off. With And The World Is Yours that problem does not exist this is a stunning companion to the inspiration. What is especially pleasing about And The World Is Yours is that M. Ropion is not playing it safe which is apropos of an actress who won her Academy Award by also taking risks.

What I so expected in the early moments of And The World Is Yours was a sparkly bergamot-y dawn sun kind of opening. M. Ropion embraces the “morning after” vibe instead. As the dawn signals the end of the night not the beginning of the day. M. Ropion deploys neroli and orange blossom in a weary evocation of daybreak. There is no sparkle but there is a banked luminosity to them maybe as you close your eyes to the rising sun. You also catch a whiff of yourself which is where M. Ropion uses cumin to cleave the floral duet. I adore when perfumers are unafraid to use cumin as an effective contrast as it is here. The cumin really deepens the sense of a long night’s day. It persists through a heart of rose and heliotrope. This ends on a mixture of tolu balsam and sandalwood sweetened by tonka bean and vanilla. The sweet smell of success.

And The World Is Yours has 10-12 hour longevity and average sillage.

This is one of my favorite perfumes from A Lab On Fire ever. It is near-perfect as M. Ropion never puts a foot wrong for my tastes. That being said, if you find cumin a problem in perfume I think there is little chance you will be as enthusiastic about this as I am. If you can get past it, or embrace it, what is to be found is the smell of the morning after success.