It was only recently that I was reminded that the first perfume I owned was a Christmas gift. I’ve spoken, in previous Christmas Day columns, of my days as a child and the place perfume filled with my parents in the Holiday season. I thought this year it was time to talk about my first feelings towards perfume along with why I wanted a specific one under the tree for Christmas 1973.

In the fall of 1973 I had made the rite of passage of starting high school. I was still trying to figure it all out in those early days. Part of that was trying to come up with a personal style. One component were big flaring bell bottom jeans. Mine were so large you couldn’t see my feet when I was walking. There was a store in our local mall called The Jean Connection. I had them order me the biggest flared bell bottoms they could find. I still remember them as the most comfortable jeans I ever owned. My shirts were these popular pull over shirts from a brand called “Hang Ten”. I liked them because they had a lot of brightly colored stripes. Taken all together they were pieces of my aesthetic, all my own, while still being like what others were wearing.

I wanted to add perfume to it all. My father wore all the standard men’s fragrances of the day. He had Dana Canoe, English Leather, and Hai Karate. I wore them a bit, but I had decided if I was going to wear something it was going to be my own thing. That’s when I saw the advertisement below in a magazine. 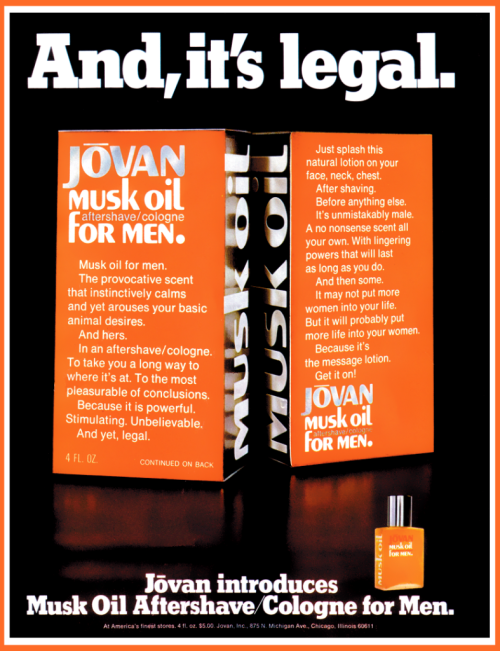 I’ll happily admit the lines about arousing female “animal desires” was not lost on my adolescent mind. Although it was the line on the back of the box which really sold me on it; “A no-nonsense scent all your own”. I wasn’t going to smell like my father. I was going to have my own, wait for it, signature scent.

When it came time to be making a list for Christmas, Jovan Musk Oil for Men was at the top. I got a little bit of pushback. Dad told me I could use any of his colognes I wanted. Mom thought I was growing up too fast, “why do you want to start wearing perfume, honey?”. I was 14 damnit! Not that I said it out loud. I used my subtle persuasive ways to push that it was the main thing I wanted. I went into Christmas morning confident I had succeeded.

When we woke up and gathered by the tree each person had their presents in a pile. Mine was a pyramid of larger rectangular boxes on the bottom, clothes. A few flat squares on top of that, records. A couple of smaller rectangles, books. On top like my own personal glittery Christmas star was a tiny rectangular box wrapped in red paper with a gold ribbon around it. When it was my turn to open my present, I snatched it off the top. As soon as I unwrapped the ribbon one peek underneath the paper showed the orange color of the box within. Yes!

From that day until today I have always owned a bottle of Jovan Musk Oil for Men. Did it get me girls? I don’t think so. I did have many of the girls I dated say I smelled nice. I think it was doing what perfume should do; add to one’s personal style. It is perhaps as close as I’ve come to having a signature scent as we define it. Ten years on I would be down the rabbit hole and the bottles on my dresser would begin to multiply. For the years prior it was pretty much a bottle of Musk Oil for Men which was my scent. For my parents it was another sign I was closer to leaving home. It was probably a bittersweet moment amidst my excitement at having the gift I wanted. It was another step towards forming the adult I wanted to eventually become. All of that happened on Christmas morning 1973.

One thought on “My First Perfume Christmas Gift”