First day of any of the big perfume expositions is a time for renewing friendships in fragrance. My day started out being introduced to a new aquatic perfume from Bruno Acampora called Azzurro di Capri. When it was presented to me I again had my skepticism of this genre front and center. What I found was a typical Mediterranean seaside opening but the drydown to a base of musk, patchouli, and amber is what elevated this above others within this style.

After surveying the layout of the fair I headed to the first panel of this year’s Esxence. Moderated by Professor Claus Noppeney of the Scent Culture Institute it was on the way perfume is judged and criticized. On the panel were Dr. Marlen Elliot Harrison Managing Editor of Fragrantica, Saskia Wilson-Brown of The Art + Olfaction Awards, and Dr. Bodo Kubartz. Dr. Harrison eloquently described the personal connection bloggers provide via their writing. By giving regular readers that context it allows for the concept of perfume as an art form worthy of this kind of judgement. The flip side of that was explored with the idea of judgement as the end goal within the framework of awards. There, by necessity, for a fair judgement to take place as much of the context and surroundings of a perfume being assessed needs to be removed. It was a spirited discussion among the panelists making it a great way to start conversations that I would have for most of the rest of the day as I walked the show floor. 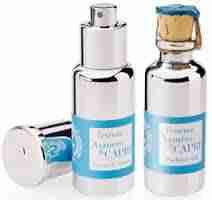 After the talk it was time to get back on to the hunt for new releases from some of my favorite brands.

I stopped in at Atelier des Ors and was presented with a sneak preview of their upcoming iris and musk release. This is a brand that has quickly developed a distinct aesthetic. What I smelled in its preliminary forms looks to me like this next release is going to be another winner.

I then stopped by to meet the team behind Coolife Carole Beaupre and Pauline Rochas. I am a big fan of the most recent release Le Quatrieme Parfum. Perfumer Yann Vasnier turned in a beautifully realized Oriental. For Le Cinquieme Parfum the communication chakra is represented, again by M. Vasnier, in a really vibrant and kinetic composition.

Of course the chemist was excited to stop by Nu_Be to try the latest elemental release Curium. I also found the name of the brand is also undergoing a change to One of Those. The brand name may change but the new perfume by perfumer Evelyne Boulanger is an extension of the Elemental series. Opening with a fantastic ambrette into a vetiver focused fragrance. It isn’t radioactive but it sure does glow.

As the day was drawing to a close I collapsed on a couch in front of Carner Barcelona. They saw my tired look and brought to me the new release from them, Costarela. Perfumer Shyamala Maisondieu added little twists to this classically constructed Mediterranean-style aquatic. The use of saffron along with the more typical bergamot in the opening is what revs things up for the eventual sea breeze and amber finish.

Day 1 opened and closed with two very different yet enjoyable interpretations of Mediterranean aquatics. For Day 2 I’ll start diving in to the new brands while catching up to some other new releases from established ones.