At this time of year I get a lot of questions about what perfume I would suggest to give someone as a gift. First I frown on fragrance as a gift and my method for giving it as a gift can be found at this link. Even when I say that people still want an answer and not wanting to be a snobby Grinch I have a couple of suggestions in my back pocket. One of my favorites is Zirh Corduroy.

Zirh is a maker primarily of men’s skin and hair products. They have a small selection of four branded fragrances. In 2001 they released Zirh by perfumer Delphine Terry which was a safe traditional lavender focused fougere. Corduroy was the second release in 2005 by perfumers Jacques Huclier and Rodrigo Flores-Roux. Corduroy was meant to be the yin to Zirh’s yang as it was designed to be a darker oriental. I’m not sure of this but I am thinking Corduroy was meant to be the cold weather complement to Zirh. I know I tend to wear it in the colder months. 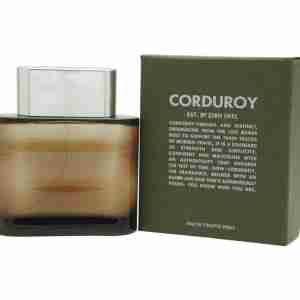 Corduroy opens with a surprisingly sophisticated citrus top accord. Mandarin is the nucleus for the perfumers to build upon with grapefruit, cardamom, and lavender. There is another listed ingredient called aquacoral but I have never been able to consciously detect it. It sounds like it should add some kind of aquatic character but that is not what I experience in the opening of Corduroy. What I get is citrus combined with an herbal lavender and cardamom. The spice cohort changes fairly rapidly as cinnamon eventually rises up. The presence of nutmeg is what eventually becomes the more extroverted note and it lies over a very delicate application of a suede accord. Corduroy eventually heads to a woody base of sandalwood, cedar, gaiac; sweetened with a bit of vanilla.

Corduroy has 14-16 hour longevity but very low sillage for a commercial release. It is that restraint which is part of the reason I recommend it as a gift.

Corduroy really is one of the best bang for your buck perfumes out there you can regularly get 100 or 125 mL size for under $15. I bought my 125 mL for $9.99 at a local discounter. If you need a stocking stuffer or you just want a little something extra for the perfume cabinet Corduroy is an excellent choice.