One of the difficulties of writing this column is deciding when a perfume from the past has been reformulated in a way that it is worth pointing out. If I think the original is awesome but it is because of banned materials like oakmoss and nitro musks, it causes a problem. Then when I try the currently available version I must see if it retains enough of the character to write about it as it exists today. One of the things which happens infrequently is the current version surpasses the original as has happened in Van Cleef & Arpels First. 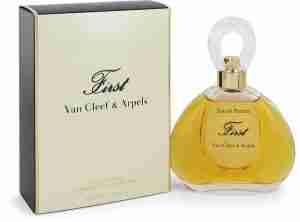 I own an original bottle of First because it is one of perfumer Jean-Claude Ellena’s first. Released in 1976 it is a typical big floral. It is fun to smell something like this and think how M. Ellena will become famous for the antithesis of it. Lots of “to be banned” materials abound. It is exactly what a mid-1970’s floral perfume smelled like.

I was digging in the discount bins a year ago around the Holidays when this nice green chypre hit me from someone spraying it nearby. I went searching to see what it was. I probably picked up everything on the tester shelf but First because I thought I knew what it would smell like. When I finally figured out it was First, I was floored. Mainly because I liked this better.

I’ve spent the last year trying to find out who was responsible for this version. It is a thankless job that no one at the big brands will admit goes on. Tracking down the perfumer was going to take more effort than I was willing to exert.

One of the things I did do was track down some of the iterations that have been released between 1976 and now. What I found was a perfume version of the party game telephone. The way it is played is the first person is given a phrase which they whisper one time only into the ear of the person next to them. This repeats until it gets back to the person who started it. What generally happens is it has been changed in a funny non-intelligible way. Rarely it ends up with a new phrase which is related to the first one.

That is what happened with First. In a 1990-ish bottle the base has begun to be changed as the musks seem to have been changed. In an early Y2K version the floral heart has gone much greener as the overall early moments have dialed back the rose and jasmine power. Then we arrive at what you can buy now.

The current version starts off with some mandarin on top of a green accord of blackcurrant bud, narcissus, and muguet. Hair spray-like aldehydes add some sparkle. The rose and jasmine are still here but they are using one of the more expansive synthetic jasmines. It allows for more space for the narcissus and muguet to expand into. They become the primary counterpoint to the rose. It moves to a modern chypre base where sandalwood, amber, clove, and some synthetic musks form it. It fits ideally with what is here now.

All of this refers to the Eau de Parfum version. The current version has 12-14 hour longevity and average sillage.

I think this game of “perfume telephone” has ended up in a better fragrance at the end of the chain. It can be found for less than $25/bottle at many discounters. If you remember the old First give the new one a try you might be surprised, too.