When it comes to celebrity fragrances there are few that make the grade. One of the most obvious reasons is the name on the bottle has little or nothing to do with it. Depending on the situation that can free a creative team to take chances but more often it leaves them to just knock off an imitation of something already on the market. The celebuscents which I admire have almost always had the celebrity intimately involved in the creative process. The first perfume to prove this principle to me was Sarah Jessica Parker Lovely. This was the debut perfume for Ms. Parker when she was at the heights of her Sex and the City fame. The whole process was covered in Chandler Burr’s book The Perfect Scent. What came across was a woman who wanted the perfume which carried her name to be something better than mediocre. It was and still is a successful perfume on the market. I think Lovely is a great perfume but I like the second perfume Ms. Parker collaborated on better; called Covet. 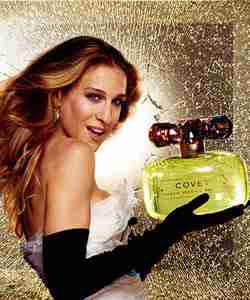 Covet came out two years after Lovely. The same creative director Ann Gottlieb was helping Ms. Parker and perfumer Frank Voelkl was picked to compose the perfume. Because of the success of Lovely I think the creative team felt they had a bit of leeway in trying something different with Covet. They would take that latitude and make something quite atypical for the state of the department store market circa 2007. Covet is like a mob of unruly kids all vying for the wearer’s attention. That amount of manic overly nuanced exposition wore most people out. I found it exhilarating. At the time it was the only thing in the mall that didn’t smell like everything else.

Time, and the consumer, has not been kind to Covet and it was discontinued about two years ago. Even though it has been discontinued it has been viewed as such a disappointment that you can find full bottles for less than $20 at almost any place that sells discount perfume. Which is why it is a Discount Diamond.

Covet opens on one of those unruly moments I mentioned. M. Voelkl takes lemon, lavender, geranium, a watery green leafy accord, and chocolate and turns them loose. It sounds like so many conflicting ideas it should just collapse. I’ll admit it comes close but I find this highly saturated opening fabulous. It never quite completely veers off course although I will admit it does drive on the wrong side of the road from time to time. This chaotic opening is what put many off because it is so weird, even eight years later it is still pretty weird. For the rest of the development Covet is relatively more straightforward as the heart is muguet and magnolia. The base is vetiver, woody notes and amber.

Covet has been consigned to being the red-headed stepchild of Ms. Parker’s brand meant to be forgotten and unloved. If you are willing to take a chance on something great and for the price why wouldn’t you? Give Covet a try you might find something that is a real diamond in the rough.