Maurice Roucel is one of our greatest perfumers and he just as easily produces a fragrance for Victoria’s Secret, 2012’s Simply Gorgeous; as he does for Frederic Malle, 2000’s Musc Ravageur. There is a broad spread to the perfumes he makes. From a gourmand like 2004’s Bond No. 9 New Haarlem to a fruity floral like 2006’s Guerlain Insolence there is always a dashing sense of style underlying all that he creates. M. Roucel feels like one of the last of the old school perfumers just turning out things that smell good. One of my favorites by M. Roucel is also one of the best perfume bargains you can find, one of the best perfumes you can buy; Rochas Tocade.

M. Roucel created Tocade in 1994 and it was one of his earliest forays into what would eventually become the gourmand style of perfume. For Tocade which translates to “whim” he centers the perfume on two notes, rose and vanilla. Vanilla had been used in a more restrained way with rose in many previous fragrances but the change here was to really up the vanilla and that in turn makes Tocade feel like an olfactory version of Turkish Delight. It is a typical Oriental and in that way it carries a heft to it appropriate for the confection it imitates. 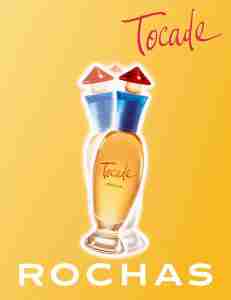 Tocade opens with a bit of light green aspects from bergamot and geranium. It gives way to a transparent rose which is given some structure with iris as support. Through the first few moments, all of this is fairly traditional pretty rose. It all changes as the vanilla makes its presence known. M. Roucel pulls off a fabulous effect with his vanilla as it never tilts into a pedestrian kind of vanilla. It never seems to get sweet and buttery, or saccharine and sugary. Somehow it straddles a knife’s edge of balance between the two. Because of the translucence of the rose it comes off almost watery. It is difficult to say M. Roucel has a signature move but if there is one this watery sheer floral effect is probably it. Once the vanilla rises fully Tocade feels like a beautiful sticky piece of Turkish Delight. To further deepen the comfort aspects amber and benzoin add a softly sweet resinous complement while a bit of musk adds a twinge of animalic contrast.

Tocade has average longevity and above average sillage.

Tocade has survived the ravages of reformulation pretty much intact for twenty years. I picked up a 1Oz. bottle for $9.99 at my local TJ Maxx to compare to my original bottle and the only difference is in the very top notes as the new bottle feels a little brighter for those first few minutes; which is probably to be expected. Once Tocade gets down to its rose and vanilla business my mid 1990’s bottle and the 2014 bottle are identical on my skin. As I mentioned above this perfume is easily obtainable from a number of sources for less than $20/Oz. I think Tocade is one of the great perfumes of the last thirty years and the fact that it isn’t more well-known is a shame; the price certainly shouldn’t be a barrier. This is an example of a master perfumer fashioning a simple construction which contains subtle shadings and brushstrokes to take it far above being a simple rose and vanilla perfume. For $10 how can you go wrong?