With so much perfume released every year it becomes easy to forget about those which were released a short while ago. One of the goals of this column is to take advantage of that as the discounting cycle is also accelerated. Throughout the nearly five years of writing Discount Diamonds this is the first entry which I think is a modern masterpiece; Lalique Encre Noire. 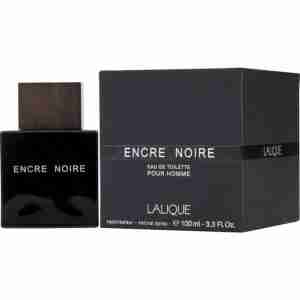 Vetiver has become a staple ingredient of perfumery in the 21st century. Prior to that it was two perfumes which were the standard bearers for the ingredient; Guerlain Vetiver and Givenchy Vetyver. They were the perfumes which introduced my generation to vetiver. As we crossed into the new century the independent perfume market began to expand rapidly. That meant there were new perspectives provided on previous keynotes. Vetiver started off with a pair of perfumes, once again, leading the modern interpretation. One of those is Editions de Parfums Frederic Malle Vetiver Extraordinaire. I don’t think that one is ever going to be a Discount Diamond. Lalique Encre Noire is the other one and it has become a fit subject for this column.

Encre Noire was released in 2006. Lalique’s fragrance business was looking for a way to join in on this new way of making perfume. Perfumer Nathalie Lorson would help as she composed three perfumes for the brand from 2006-2007; Perles de Lalique, Amethyst, and Encre Noire. It was a statement of intent to try for something different.

The original vetivers were citrus affairs with the vetiver providing an acerbic green contrast. More interested in the higher register effects. Encre Noire was going to go for a different style; plumbing the woody depths underneath the green. What was also so interesting about doing that was there was a smoky quality just waiting to be separated and amplified. Mme Lorson finds that.

The opening of Encre Noire is the classic grassy green of old-style vetiver. Mme Lorson uses cedar to find the woods inherent within vetiver. She uses two sources of vetiver in Encre Noire, Haitian and Bourbon. The Haitian vetiver I have come to know has a quite prominent smoky character. By blending the two versions Mme Lorson tunes the smoke to a soft level. I used to burn pine needles as a boy and whenever I wear Encre Noire the smoky nature reminds me of this. The Bourbon vetiver brings a spicy complement to the Haitian smoky version. The base is a cocktail of sensual musks which really represent the “noire” in the name.

I consider Encre Noire to be one of the best perfumes of this century. That you can buy a bottle for under $30 makes it a steal. There is no other Discount Diamond which will shine brighter.