Every trend has a beginning. Prior to 1991 the idea of putting a celebrity’s name on a perfume was unheard of. After the success of Elizabeth Taylor White Diamonds the brands couldn’t find someone to partner with fast enough. Even this was a slow burn. White Shoulders was the third fragrance released with Ms. Taylor’s name. Two gendered versions of Passion preceded it. At this point in time Ms. Taylor was an all-caps large font “star”. The public fascination with her was voracious in a time where that played out in supermarket tabloids instead of Gawker. She had her own nick name La Liz. Because of the less relentless pressure she was able to ride that wave of notoriety without wiping out. 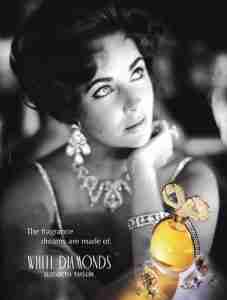 Her foray into fragrance wasn’t a failure through the two versions of Passion. It was just that nobody saw the popularity of White Shoulders ahead of its release. Perfumers Carlos Benaim and Olivier Gillotin were seemingly tasked to create an “elegant” white floral. This is all happening right on the cusp of fragrance trends taking a hard left towards fresh and clean. To their credit they designed White Diamonds as if that was never going to happen.

White Diamonds felt like a throwback even in 1991. The perfumers throw a cloud of aldehydes over a fresh lily. In hindsight I can say here is where a little fresh resides. It disappears when a floral ingredient as exuberant as La Liz appears in tuberose. This is a full volume version. The indoles add a skank to it which jasmine and narcissus call out to. It heads towards a patchouli and sandalwood base given some warmth via amber.

White Diamonds has 6-8 hour longevity and above average sillage in its current formulation.

The bottle I own is from around 2000. I also picked up a mini of the current version. The biggest difference when comparing is there is more jasmine in the heart now. It still doesn’t hesitate in showing off the indoles. The base is also less complex, but I can’t quite put my finger on it. It isn’t as intense as it was in the original. Something is missing. I don’t think it dramatically changes things because it is the aldehydic top accord and the tuberose heart which makes this.

White Diamonds was a gigantic best-seller for well over a decade. Even after the trends went far away people kept buying it. Re-visiting it I forgot the freshness of that top accord and what a contrast the dirty indoles make with it. It still seems like an artifact of an earlier fragrance era. The influence was really felt in the hundreds of celebrities who would rush to put their name on a perfume.