I chose Davidoff Cool Water as a Discount Diamond a couple months ago and I mentioned that it was the perfume which launched a thousand aquatic fragrances on to the market. Reading between the lines you can add the subtext “and most of them were bad”. But not all of them. 1995’s Bvlgari Aqva pour Homme took some of the concepts of the aquatic class and added in some unique beats to make it one of the few to stand out as successfully different.

Jacques Cavallier was part of the original group of perfumers who took the concepts of the aquatic and expanded it in the mid 1990’s. He was responsible for L’Eau D’Issey and L’Eau D’Issey pour Homme and was part of the creative team on Armani Acqua di Gio pour Homme. All of these were examples of the best aquatic fragrances on the shelf. By 2005 when he was commissioned to do Bvlgari Aqva pour Homme he wanted to try something different. His choice was to take two raw materials created especially to evoke water and make them the centerpiece of Bvlgari Aqva pour Homme. 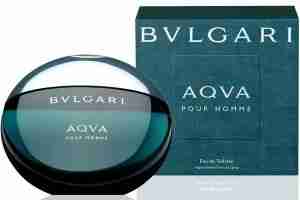 M. Cavallier starts in well-trodden territory with citrus on top. Mandarin and petitgrain add a lip pursing tartness to the top notes. Then we get to the two unique raw materials in the heart Santolina and Posidonia. Santolina is more commonly known as cotton lavender and it has a lavender aspect crossed with a strong syrupy quality. Posidonia is simply the smell of drying seaweed after the ocean has receded leaving it behind on the beach. It has an ozonic watery quality on top of the vegetal note. Smelling either of these by themselves you would be hard pressed to believe these could be the centerpiece of a perfume. That is M. Cavallier’s skill as he takes these two notes and balances them so the lavender, the ozonic notes and a bit of the seaweed aspects form a fascinating seaside accord. It feels more realistic than the previous aquatics which wanted to clean up the ocean. Bvlgari Aqva pour Homme gives it all to you right down to the seaweed. The final phase is also quite interesting as M. Cavallier takes a soft amber and adds clary sage. Clary sage is usually further up the pyramid but in Bvlgari Aqva pour Homme it almost seems like it is what the seaweed evolves into. The amber adds a subtle warmth to the base notes.

M. Cavallier took a chance by using notes which weren’t widely used in the aquatic fragrance family and fashioned something wonderfully unique. It is one of the few aquatics I think is worth owning. If you want to own it it is found on most of the discount websites for less than $40 for 100mL.

Disclosure: This review was based on a bottle of Bvlgari Aqva pour Homme I purchased.