Thierry Mugler is one of the most successful mainstream perfume brands ever. Starting in 1992 with the release of their first perfume, Angel, they invented the gourmand style of perfume. I looked back over my master list of all that I own and within the mainstream sector there is nothing that comes close to the number of Thierry Mugler bottles. I would say that the creative team at Thierry Mugler seems to have cracked the code on how to market challenging niche-type fragrances to the masses. Despite all that success when you are working with that mindset there are going to be times you don’t make the connection to the mass market. It took twelve years for the first miss to happen, B*Men. 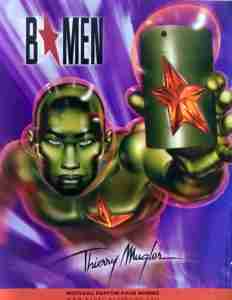 As is obvious from the name B*Men is the sequel to A*Men. What is less obvious is this wasn’t meant to be alphabetical per se. Instead Thierry Mugler is a big comic book fan and these were meant to be the beginning of a team of perfume superheroes. The ad above from the release in 2004 gives you an idea of what the superhero looks like. The third member of the team would come along in 2007; Ice*Men.

B*Men was composed by a team of A*Men perfumer Jacques Huclier assisted by Christine Nagel. A*Men had been the masculine gourmand partner to Angel. B*Men was going to go in a more traditionally masculine direction building around citrus, spices, and woods. Which might be the beginning of why this didn’t succeed. The first four releases; Angel, A*Men, Innocent, and Mugler Cologne would never carry the adjective traditional. B*Men seemed to want to see if classic fragrance making with only slight Mugler tweaks could still appeal.

B*Men starts on a duet of tangerine and rhubarb. The rhubarb is used as a vegetal grapefruit surrogate. It adds green and tart to the sweeter tangerine forming a soft citrus top accord. The heart is a sturdy redwood which is surrounded by cardamom and nutmeg. The base veers away from any hint of gourmand as amber replaces the signature base accord of A*Men. That makes B*Men much less of a powerhouse than A*Men is.

Everything about B*Men, except for the rhubarb, is traditional masculine tropes. I think it is one of the better versions of this style of perfume. When I’m in the mood for this B*Men is one I consider. The rest of the world gave a collective shrug of the shoulders. The most consistent criticism was it wasn’t “as good as A*Men”; which shouldn’t be a disqualifier. I think it more likely a perfume brand which had conditioned its consumer for something different lost them with something so similar to other perfumes. It makes it one of the more interesting denizens of the Dead Letter Office. Sent there for being too normal.