As the calendar changed over to 2000 as a society we were warned of doomsday prophecies along with the collective meltdown of our computer infrastructure’s inability to deal with the changeover to Y2K. As we look back from the safety of fifteen years later without having lost the ability to look up Nostradamus via Google it is clear that the fin de siècle also had effects on different creative pursuits. It encouraged risk taking because there might not be another chance. At this time there was no bigger risk taker than Tom Ford. 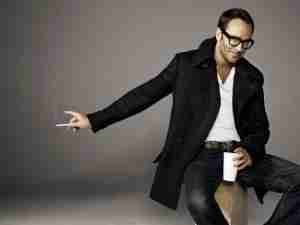 Mr. Ford had made a leap of faith when he joined Gucci in 1990 as the women’s ready-to-wear designer. That would be the start of meteoric rise as Gucci went from has-been to have-to-have all under Mr. Ford’s savvy direction. He dramatically expanded the brand into every sector of fashion and style. It is also where he would begin his fragrance career. In 1997 he would release Gucci Envy followed a year later by Gucci Envy for Men. They were typical Floral and Oriental fragrances of the time period and there was little of the signature style Mr. Ford would bring to fragrance. That would come with the next set of releases. 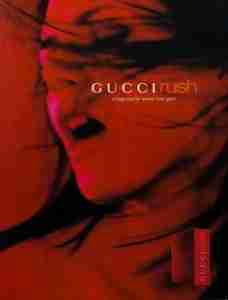 In 1999 with the release of Gucci Rush Mr. Ford used his trademark mix of danger and sexuality for the first time in fragrance. The sexuality came courtesy of model Liberty Ross tinted red with a look of open-mouthed pleasure underneath the crimson. The danger came from the bottle which looked like an anonymous VHS rental tape box which would most commonly hold a pornographic movie. All of this is tame compared to what Mr. Ford has evolved into but it is all on display in its earliest incarnation. With Gucci Rush for Men the other thing Mr. Ford will become known for also displays itself for the first time; the use of an ingredient which would set the standard for fragrance from that point on. That ingredient in Gucci Rush for Men was incense.

Incense? Really incense hasn’t always been a thing? Incense had been used in perfumery as an accent note but very rarely as the focal point. In a mainstream designer fragrance? Not at all. Mr. Ford worked with perfumers Antoine Maisondieu and Daniela Andrier to create a typical masculine woody structure infused with a significant amount of incense.

Rush for Men opens with the light woodiness of cypress matched up with lavender. Cedar makes the woody quality cleaner while a very light application of patchouli tries to mar those sterile lines. This all transitions quite rapidly into the foundation of sandalwood, cade wood, and incense. The sandalwood is boosted with a suite of milky lactones so that it provides a creamier woody foil. I am guessing this was to allow the incense to not become too astringent in this first use of it. The result is the incense comes in with a translucent quality while also becoming the focal point.

Rush for Men has 8-10 hour longevity and average sillage.

When you smell Rush for Men now it seems like a child’s version of an incense perfume. It is similar to what Mr. Ford would do with oud when he used it in YSL M7. You have to dole out the unusual in small doses before really letting them have it. Just as M7 would launch a thousand ouds; Rush for Men paved the way for the incense prominent perfumes, especially on the masculine side.

Based on the research I was able to do I was unable to find a reason for the discontinuation. Rush for Men sold quite well especially in the first couple of years. It was a viable alternative for the other styles of the time on the masculine side. The only reason I have found in a couple of places is purely anecdotal and sort of tin-foil hat conspiracy theory. The idea is Gucci was decisively cleaving itself from the Tom Ford era by discontinuing as much of it as they could after he left in 2004. Of course there is no hard evidence of this. Over time many have come to realize what a trailblazer perfume Rush for Men was and the price of a bottle has climbed pretty steeply over the past few years.

If you get the opportunity to try some it is really a time capsule capturing the early influences of Mr. Ford as well as showing the Y2K era as well.