After this past year’s buying spree of niche brands Le Labo and Frederic Malle it is hard to imagine a time when Estee Lauder was not a powerhouse company. That time was the mid 1980’s as the brand labored to understand the shifting beauty demographic. They were having so much trouble figuring out what a 1980’s woman wanted they thought they might enter the masculine perfume sector of the market. They were no better prepared for that either. 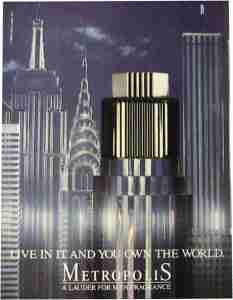 In 1987 creative directors Evelyn Lauder and Karen Khoury hired perfumer Pierre Wargnye to compose Metropolis. The marketing was all geared to the “greed is good” generation. Metropolis wasn’t about getting the girl. It was about getting the money that would get you the girl. Metropolis was all about “the irresistible possibility of success”. M. Wargnye was on a creative roll having created 1982’s Guy Laroche Drakkar Noir and followed that up with 1985’s Boss Number One. He had created two memorable takes on fougeres and Metropolis was going to go in a slightly different direction. The problem with Metropolis was the timing and the promotion. By the time Metropolis reached the department store in 1987 the concept of conspicuous consumption was beginning its eventual death spiral. The tastes of men were turning to fresher aquatics as Davidoff Cool Water would make a splash months after the release of Metropolis. In the most confounding move Estee Lauder hired Liza Minnellli to be the exclusive spokesperson for Metropolis for a year for the then unheard of $1 million. She was in a disastrous television commercial where she was filmed around New York City while singing “City Lights” before delivering the tag line, “Wear it and you own the world”. As Metropolis was rolled out in November of 1987 she made in-store appearances which were less about the fragrance and more about her signing autographs, for exactly one hour at each store. So there it is Metropolis was a casualty of shifting priorities, shifting tastes, and shifting societal priorities. Whew! It would be gone by 1992.

When I bought my bottle during that November of 1987 I fell in love with it right away. I was wearing Calvin Klein Obsession for Men and Metropolis offered something completely different. M Wargnye would take liberties with his successful fougeres and make Metropolis more woody shrouded in greens and leather.

Metropolis opens upon an herbal and lavender pairing. The best lavender has a significant herbal character. I didn’t know this at the time but I do now. The more I’ve learned the more I appreciate the top notes as M. Wargnye adds sage and basil to pull out the herbalness of the lavender. It allowed Metropolis to have a safe floral character that a man would wear. The heart is a fantastic spiced and incense affair. Cinnamon, bay leaves, and clove mix with incense. If there was a “money” accord in Metropolis it was this. The base notes are a leather accord of vetiver, patchouli, and oakmoss combined with sandalwood and amber.

Metropolis is not one of these highly sought after discontinued perfumes and you can find it for very reasonable prices. I think it is a better perfume than either of M. Wargnye’s more well-known creations. I still wear Metropolis to work a couple times a year. While it may not make me feel like Gordon Gekko, thankfully, it does make me smell pretty damn good.