I started the final day of Cosmoprof North America 2016 learning about the new brand i smell great. Co-founded by Jane Daly, Randi Shinder of Clean, and actress Sophia Bush. i smell great is a full-service beauty line but it was the fragrance part I was most interested in. They currently have four releases; Angel Cake, Wild Honey, Candy Crush, and Beach Babe. It is a line with Millennials in mind. They have dedicated social media channels for users to post what they’re wearing and layering daily. Ms. Bush also joins in with her scent of the day. The first three are all variations on sweetness with Wild Honey having the most balanced approach. Beach Babe is an outlier for its suntan lotion and ocean vibe. The other interesting thing is the perfume is formulated in micro encapsulated spheres which over the course of the day open up as you apply friction to where you applied. I put some on today and found I would get a surprising boost of scent throughout the day. I also got a kick how my scent strips from the morning turned in to scratch and sniff by the evening. This is another one of those Millennial targeted fragrances which I will be following.

It was great to have the opportunity to reconnect with Mark Crames of Demeter. I have always admired his straightforward sensibility when it comes to making perfume. Oh and he also has a lot of fun at the same time. Mr. Crames gave me a preview of something that will be a bit of a new direction for Demeter. In time for the Holidays they will release a Zodiac collection. One perfume for each of the astrological signs. The fun part is those signs which are supposed to be attracted to each other have been formulated so they can be ideally layered. Brings a whole new twist to the old pick-up line, “What’s your sign?” 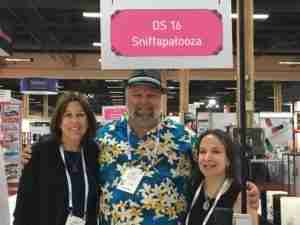 Myself and the Karens of Sniffapalooza

My last two stops were to acquaint myself with two fragrance collections; one new and one which has been around for a few years.

Parfums Berdoues is the one which has been around. I had tried their original 1902 collection of which the Violet is still a favorite. Over the years they just sort of drifted away from my awareness. Jose Penalba of Amerikas brought me up to date. Starting last year Berdoues released a six fragrance collection which has a new entry Vanira Moorea. They also did a three fragrance Grand Cru collection focused on oud. My favorite of that line was the Oud Wa Misk. The brand has evolved significantly from the last time I checked in. The new direction and perfumes are worth taking a look at if you also let Berdoues fall off your radar.

Then new line is called Paglieri 1876 and will be launched in the fall. An Italian line Working with perfumers Henri Bergia and Eric Fracapane. Each of the first six releases is inspired by a city in Italy. Each bottle has a laser etched colorful logo to also go along with the fragrance to identify its city. It is a well-balanced collection which I enjoyed but the one which stood out for me was Romae based on Rome. It had a wonderfully sophisticated spicy core sweetened with rose and vanilla.

I had a fabulous time in Vegas covering Cosmoprof North America 2016.

For the last time Colognoisseur has left the building.