Every time I attend a perfume fair like Pitti Fragranze in Florence I value the concentration of new perfume it presents. The amount of different brands easily allows me to see if there any prevalent trends. It also allows me to spend some time with some of my favorite people in perfumery. This year there were a couple of those who really stood out for me.

First was Andy Tauer who was as gracious as ever. What impressed me was his new Tauerville brand which comes in at a price point about half of his regular Tauer Perfumes releases. The three perfumes Rose Flash, Vanilla Flash and Incense Flash are a reminder that Hr. Tauer was one of the first successful independent perfumers. The Tauerville line feels like he is returning to those early days in the lab creating for the sheer joy of it. I am looking forward to seeing what new denizens of Tauerville the future holds. I am hopeful that others will pick up this initiative and repeat it with their brand.  The entire package deserves some imitation.

It has been a few years since I had the opportunity to sit down and speak with Ineke Ruhland of Ineke Perfumes. It had been two years since her last alphabet perfume Hothouse Flower. Making up for lost time she is adding two new letters; Idyllwild and Jack & Jackie. I spent a delightful hour with her as she displayed the raw ingredients used to create both of these new perfumes. When smelling some of the materials she employed I am left to admire her skill in toning down some of the louder ones and making some of the softer ones more noticeable. 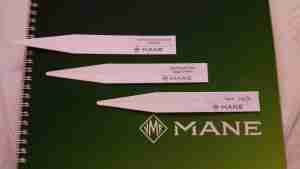 I would go through the same experience a day earlier at the MANE panel where they handed the audience strips of every ingredient in the new JF Schwarzlose Altruism. What struck me between the two similar presentations was how precise a balancing act a perfumer needs to achieve a desired effect.

If there was one trend which stood out for me it was the resurgence of leather. It has always been around but the fall and winter new releases are heavily upholstered in fine leather. Last year it was a bland pretty tuberose which was the prevailing note. This year the leathers showed an admirable array of effects. One reason for this is leather is an accord and each perfumer has their own version of it. Because it is an accord it also can be tuned more specifically which makes it more varied in effect.

The other smaller trend I noticed was green tuberose is going to make a big statement over the next few months. Two of the sneak previews I received used the greener less boisterous version of tuberose as the central note. It is a much better alternative to full-spectrum tuberose which retains some of the indoles and the green keeps the more effusive nature under wraps. It gives room for brands to find something different under the tuberose sun.

Finally I end with some “blind items” where I share some of the confidential previews I obtained with some key information missing.

It may be spring of 2016 before the eau de cucumber perfume I’ve been teased with twice finally sees the light of day. I can wait because as it exists right now it should be perfect for that time of year.

Another brand is making a fragrant bridge between the creative director’s home country and the perfumer’s home country. The early version I tried of that needs a little more work but the heart accord I smelled was perfect. It just needs some equally impressive running mates.

I smelled three new perfumes from an independent perfumer for three different brands. I think all three are among the best work this perfumer has done. The gourmand coffee one is the one I am having the hardest time trying to forget.

Pierre Guillaume had one of the filthiest skankiest scents I’ve smelled in a while. That was an experiment made especially for Pitti Fragranze. A different perfumer displayed something almost as dirty with the desire to release it. I hope they do.

That’s it for Part 1. I’ll be back for Part 2 tomorrow where I name the Top 10 New Perfumes I tried at Pitti Fragranze 2015.