This was a very different Esxence for me than any previous one that I attended. One reason for that was I spent a large portion of my time in The Mall in Milano with a microphone in my hand and in front of a camera. It is a different perspective to be sure and I want to thank every one of my interview subjects for making it so easy for me. I hope those watching at home on the web viewer could feel my excitement.

One oddity of every Esxence is I have to travel across an entire ocean to meet someone who lives in the US. This year that dubious honor goes to Saskia Wilson-Brown of The Institute for Art & Olfaction (IAO). On the first day of the show she revealed the five finalists in each category for the 2015 Art & Olfaction Awards. The simple creation of the IAO and the awards which carry their name already let me know what a great person she was. The opportunity we had to chat over all three days confirmed that. After spending this time with her I am more sure than ever that the Art & Olfaction Awards are going to be one of the premiere awards in all of perfumery sooner than later. 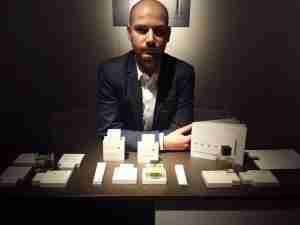 If there was one person I met who radiated the passion of doing something you love it was Andrea Rubini. I started Day 3 standing in front of his stand and told him to tell me about his perfume. Instead of business plans or sales strategies he started with a smile and the phrase, “I was born into a family of perfumers….” From there he proudly displayed the perfume which carries his name and he was equally as excited when describing the other members of the team behind Rubini Fundamental. In a show of 150 different brands it might have been the tiniest which had the largest emotion.

Another feature of every Esxence for me is I spend time with perfumers with whom I have not had an opportunity to meet previously.

Luca Maffei of Atelier Fragranze Milano was tapped by brand Jul et Mad to do two of their new “Les White” collection. Sig. Maffei was so joyously animated when speaking with me about the creative process behind Nea and Garuda it was infectious. He has a joie de vivre which translates to his perfumes.

The other perfumer I spent some time with was Stephane Humbert Lucas. I have been a big supporter of his work in the past but we had never had the opportunity to really talk about perfume for any length of time before. As he showed me his new Mortal Skin and Harrod’s Limited Edition there was a noticeable smile on his face as he watched my reactions. I think perfumers know when they have made something special and he seemed happy as he watched me connect with his new creations.

Believe it or not I had never met Bertrand Duchaufour prior to Esxence. He showed me his new I miss Violet for The Different Company. That a perfumer as prolific as M. Duchaufour also still displays the delight of creation is testament to his longevity.

If there was a rock star of this year’s Esxence it had to be Michael Edwards of the Fragrances of the World reference book. He was seemingly everywhere on the floor as I worked my way around. His SRO talk on how oud came to be part of western perfumery was one of the highlights of that part of the Esxence program.

Oh yes there were perfumes to be sampled and tomorrow in Part 2 I’ll call out the top 10 from Esxence 2015.