Buongiorno Perfume Lovers! As I am now attending my third Esxence I have come to realize the days of my walking the expositions without seeing someone I know are long gone. That is not a bad thing as I traversed the brand new location the Triennale di Milano sharing kisses on both cheeks and wide smiles of recognition. For an exhibition devoted to artistic perfumery having it in a museum devoted to cutting edge design seems like a natural fit. The layout this year of one long winding road with the best artistic perfumery has to offer is a delightful change as I often felt as if I was on the road to discovery. 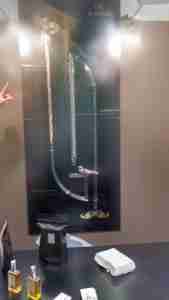 My first stop was at Naomi Goodsir Parfums. Why? Because besides fabulous fragrances Ms. Goodsir makes the most amazing hats and her display had a condenser in it. This appeals to the perfumista, the hat wearer, and the chemist all at once. What really appealed to me was the new fragrance, Or de Serail. For this third fragrance in the line perfumer Bertrand Duchaufour has created a densely textural tobacco fragrance. This has all the complex design elements of one of Ms. Goodsir’s hats and the same unique aesthetic offered by the first two fragrances. This was the strip I kept smelling all day as it just kept evolving into something different every time I revisited it. Can’t wait to wear it when I get home.

I renewed my friendship with perfumer Mark Buxton and although there is nothing new to add to the Mark Buxton Perfumes line he did give me a sneak preview of something very special. For the new Wes Anderson movie “The Grand Budapest Hotel” he created a classic cologne for the character played by Ralph Fiennes, Monsieur H. Monsieur H never leaves his room without spraying on “L’Air de Panache”. This is a throwback to the old 50’s style of cologne but redolent of high quality naturals. This is the epitome of what cologne can be when great materials are used. L’Air de Panache was only produced in small quantity for the movie premiere and is not available for sale. Why am I telling you about this? Because just steps away another perfume house was going to scratch the perfume itch Mr. Buxton started.

When I walked up to Etienne de Swardt at the Etat Libre D’Orange Booth I saw this advertising tag line, “We’ve given you decadent, we’ve given you outrageous, and now we give you nice” for the simply named Cologne. As I longed for a return to the 50’s style of cologne here was that fragrance. This is simple cologne construction done extremely well. Which makes it better than just nice. 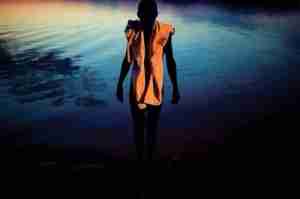 I think the fragrance I knew was going to be here that I was most eager to try was the new one from Olfactive Studio, Ombre Indigo. The azure colored juice delivered a one-two punch of tuberose and leather surrounded by shadowy notes like saffron, papyrus, benzoin, and plum. They capture the shadows inherent in the photographic inspiration, by Gustavo Pellizzon, seen above. New perfumer Mylene Alran of Robertet has combined a host of the singular Robertet palette of natural raw materials to produce a feast of visual and olfactive delights. It is captivating in every way.

In between all this sniffing there were three panels to attend. Prof. Claus Noppeney spoke on the different ways Perfume & Art are intersecting. The thesis is the collaborations open up the concept of “Perfume As Art” to the general public.

Mustafa Sebbagh took us on an explanation of the images he chose for the nu_be advertising campaign. It was something he said though that really resonated with me. He was talking about how the essential odor of something holds the truth about it and when he meets someone he takes in their odor because, “Your smell doesn’t lie.” Something to ponder. 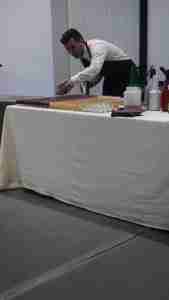 The final panel was Edmond Roudnitska Happy Hour as Marika Vecchiattini, of Bergamotto e Benzoino, and Patricia de Nicolai shared M. Roudnitska’s classic fragrances Rochas Femme, Eau D’Hermes, and Diorella. Paired with each of these was a special cocktail to attempt to mimic the fragrance. The one which went with Femme was the most successful as by using wine it recreated the classic prunol base in drinkable form.

As I walked away from Happy Hour I realize the entire day spent at Esxence wasn’t just a single hour of enjoyment they were all Happy Hours.

I’ll be back tomorrow with reports on some other new perfumes I can’t wait to try from some of my favorite lines and Roja Dove has directed me to a brand new line which has impressed him.