If there is anything current times have taught me is to let those you care about know it. I’ve written too many remembrances in the last few months. This time I want to share how important Michelyn Camen has been to my writing but also to the communication of perfumery on the tenth anniversary (and a month) of her blog CaFleureBon.

I “met” Michelyn over the internet in 2009 when I answered a question on Basenotes about whether guys wore women’s fragrances. She contacted me and asked me if I wanted to do a guest post for her on Fragrantica. I wrote my very first review on Frederic Malle Geranium pour Homme. From there she asked me to become a regular contributor. A year later in March of 2010 she asked me to help her start a new blog. She called it CaFleureBon. She told me she wanted to cover all aspects of niche and independent perfumery. I was so surprised to be asked but I was also fascinated at being there on the ground floor of trying to build her vision of a “scented salon”. I shared the first day’s post with perfumer Michel Roudnitska’s eloquent editorial on ethical perfumery. Beneath that I did a review of the perfume M. Roudnitska did for Frederic Malle, Noir Epices.

Michelyn and I at the Perfumed Plume Awards

For the next four years I would spend a few hours every day listening to the ideas Michelyn had. Helping her refine them by acting as a sounding board. It was never more fun than when a tangent of a conversation would turn into the seed of an idea in Michelyn’s imagination. I learned that if you give anything enough consideration you can usually find something worthwhile. I’ve never met someone so naturally blessed with the ability to seize upon concepts, turning them into reality.

Together with Ida Meister we grew CaFleureBon into Michelyn’s day one vision. She always knew what, and who, should be in her salon. The list of writers has been impressive; many of them award-winners. I look at the current roster with admiration. I still read everything because CaFleureBon remains relevant a decade on. That is testament to the clarity of her vision. 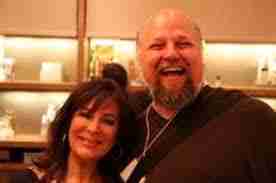 Michelyn and I at my first Sniffapalooza

When you work on something in the early days you also become friends through the effort. Over time I learned of our shared love of Star Trek, fashion, and urban fantasy among many other things. Michelyn took me on some hysterical adventures. I got my eyebrows plucked. She guided me through my first Sniffapalooza. She sent me to Esxence to represent CaFleureBon. She showed faith in an amateur writer to help make me better. She was so good at that I decided I wanted to start my own blog just because I wanted to write more.

Colognoisseur wouldn’t exist if Michelyn hadn’t shown me what it took to execute a daily blog. The amount of personal joy I get from writing about perfume is because Michelyn saw something in me that she could form into a successful communicator. There are times that the words “thank you” seem inadequate. They shouldn’t be. It is my way of telling you what an amazing person you are, Michelyn.

To her credit she was all ready to have a big tenth anniversary blowout, but these are not the times for that. She is correct but I’m going to celebrate her creativity on my own terms over the next three days. Michelyn has the ability as a creative director to get some incredible fragrances from some of her favorite independent perfumers. I am going to honor everything that she does over these next days as I review DSH Perfumes BIWA, 4160 Tuesdays Dark Queen, and Bogue Profumo OOOH!

One thought on “A Tribute to Michelyn Camen of CaFleureBon”